by Shane Regan
After a 3 hour drive from Blantyre, we arrived in Mulanje, at the base of an enormous mountain. Looking out of the car window as we approached we could see how the massive rock formation filled the sky. Upon arriving at a restaurant up the mountain a ways, the rest of the youth and I took a short 1 hour hike to the first viewpoint of the mountain trail. Immediately after starting on the trail we found ourselves at a crooked bridge, half of which had no guard rail because it had broken off. The bridge, although broken was sturdy, and held us as we walked over a river pouring down a small waterfall. Just after the bridge was an expansive view of Mulanje, along with bushes of tea stretching down the side of the mountain. The trail from there on was very overgrown, for about a mile after (with a clearing in the middle displaying a second beautiful river crossing) we were constantly needing to push away the branches of bushes that were taller than us. Finally we came to a large Boulder that the trail split off towards upon climbing it we were given a stunning view which included a gorgeous waterfall trailing down from the steep mountain above. We sat on the boulder soaking in the scenery for a good 10-20 minutes. Watching the waterfall, admiring the view of Mulanje, spotting the monkeys jumping in the trees we had just walked out of, and trying to find the mountain’s peak hidden in the clouds before we started back down the trail to the restaurant and our highly anticipated lunch. 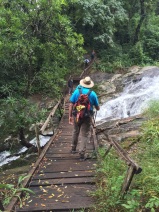 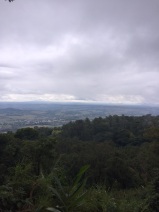 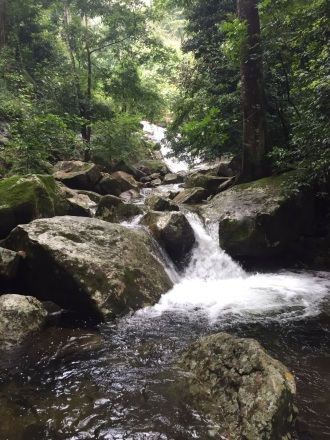 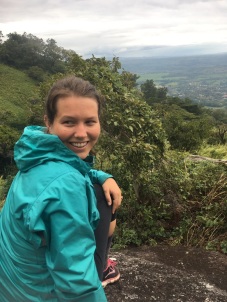 by Elise Quick
At the Mulanje mountain we went on a hike. We had to cross a bridge and rocks in a waterfall to get to the first look out point, we only went to the first one because it would have taken too long to go to all 5 look out points and to the top. Once we got to the lookout point there was a huge boulder we all climbed on top of and sat and looked at the view. We could see monkeys in the trees and a amazing waterfall. It was a beautiful and everyone had a lot of fun.